Bear with me as I use the internet as my free-ish therapist.

I don’t often use a thesaurus. When I do, it’s because the word I want is in my brain but not materializing, so I’ll use the thesaurus to try to suss out what I’m intending to say. I do love when other people use a thesaurus, though. Especially when they are obviously choosing words that they’re not entirely sure of. Today, I was using a thesaurus without having a specific word in mind because I wanted to be alliterative. I absolutely adore alliteration. ANYWAY. I wanted a synonym for “change” or “transformation” that started with “F.”

The only thing that came up was “fluctuation.” And that just made me laugh. Because fluctuating is not my goal. Fluctuating is my current state.

And Now for Something Completely Different

The last few years I’ve become a fearful person. I’ve lost a lot of the confidence I used to have. Part of that is being stuck in an employment situation where the feedback fluctuated (ha! used it!) between over-the-top praise and ridiculous, unfounded, mean-spirited criticism.

Part of that was being stuck in friend-lationships that weren’t healthy, because I glommed onto the first friendly folks when I moved to Portland and wasn’t as discerning as I should’ve been with my friend love.

Part of that was spending a lot of time worrying about saying or doing the wrong thing at the wrong time and upsetting the delicate ego balance that I tiptoed around starting in 2008.

Part of that is my natural state of being. I’ve been diagnosed with all sorts of fun (and sometimes contradictory) brain malfunctions. The older and more experienced I get, though, the more I realize that the one defining characteristic of everything my brain has ever done wrong is the overwhelming anxiety disorder. 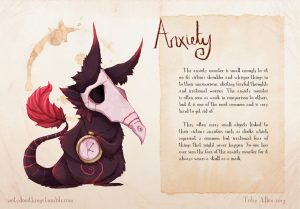 I am good with routine. When I was working, my routine was

It was a good routine.

When I left the architect, my routine was disrupted. I was staying up later, not eating on days when no one was around to see if I was eating or not, I didn’t have Bean every day to keep my days steady, but I was still doing many of those things…just later. And working out fell by the wayside. I was staying up too late to get up early to write and workout. But it was no big deal. On nights I didn’t have the kid, I did the writing. It kind of worked.

When my job ended, everything just went tits up. I spent a lot of September and October alone in my house doing nothing. Not working out. Not writing. Not editing. I had all the time to make things happen, but I was too overwhelmed to get started. 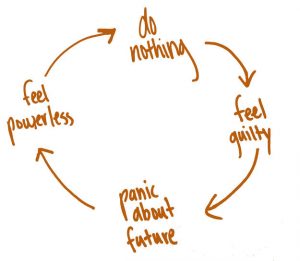 Now we all know that to some degree I got over that, because my book was published this week, but I’ve still never gotten back to that routine. Every time I think I’m getting close, something happens to fuck it all up again.

It’s been a hard week. Releasing a book is stressful, even though it was the culmination of a lifetime of dreams. Having a child in a co-parenting situation is stressful, because I am not in control 50% of the time and I really like to be in control. Dealing with my recent rental situation is stressful because there were rats and the landlord and I disagree on a few financial things. Not having a job is stressful. Because money is awesome and I would like some of that stuff.

Do you know what helps my stress levels? Working out. Working hard. Being a little bit sore most of the time.

Getting to bed before eleven.

Getting up before six.

With my current mental state (fragile, in case you’re looking for another f-word), that isn’t happening. I need to find the switch to flip.

Self-care and self-love have fallen by the wayside in my attempt to throw all my energy into caring for my son and fighting all the battles that continually show up. 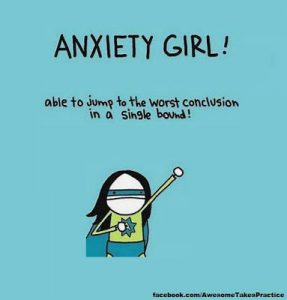 I just bought BexLife’s new book (at the recommendation of my PSM) in an attempt to find that spark that will help me reconnect with me. I signed up for Weight Watchers (something I’ve used to great effect in the past) as a way to be accountable for what I’m putting (or so very often, not putting) in my body. I have packed my swim bag and intend to drag my anxiety-ridden ass back to the pool (that is less than 3 blocks from my new digs) next week. I will take the boxes of work detritus out of the back of my car so I feel safe parking at a trail head and running in Forest Park. I have the tools I need.

(Except you. Each and every one of you. If you could all commit to buying my book once/day…that’d be cool. I mean really…what’s $2.99/day? That’s less than a coffee at Starbucks! *cue sad music and a montage of hungry, cold Amy who can’t even turn on the space heater in her office without tripping the surge protector*)

Deep in Editland & the Dreams are Odd